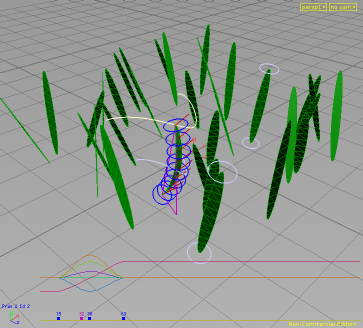 The intent is to quickly modify a substantial quantity of grass, hairs, or feathers.

Note that this node's custom "selection" and "keys" may be independent of the primary system's notion of selections and keys.

For Houdini, you must be in the "Show Handle" mode to display the brush and make changes.

Primitives on the Input Surface can be selected and bent individually.

The Edit page shows the keys affecting the selected primitive at the current time. If no primitive is selected, or it does not have two adjacent keys, one or both of the entries may be listed as all zeros. LeanX and LeanZ tilts the primitive to the side without changing its inherent shape. ArcX and ArcZ deforms the primitive by rotating the base and tip transform in opposite direction. This should appear as though the midpoint is being translated while the base and tip positions are locked down. The SpinY rotates the whole primitive along its length while TwistY adds a gradual rotation towards the tip.

The Data page deals with groups and attributes. If set, any keyed primitives are added to the Change Group. If an ID Attribute is given, keys are stored using this integer attribute as the index instead of defaulting to the primitive order. This can protect against mangling all the changes if the input gets filtered or reordered.

The Behavior page allows you to adjust performance and quality. The default use of Fast Power approximates the matrix power operation with tuned post-transform blending, which is about 100x faster. In this mode, Linearity adjusts an additional blend to pure linear interpolation in the intent to match the curvature of the true matrix power.

The Display page controls what visual feedback is provided in the viewer. Keyed Primitives indicates which primitives have keys, even if not picked. Tracers are temporally-connected lines following the the tip and halfway point of the picked primitive. The Temporal Echo draws lines along the picked primitive, when isolated, at various frames. Twist draws lines perpendicular to the primitive to indicate the spin along the primitive. Angle draws a right triangle with a one horizontal side and one vertical side to highlight the lean. The Overlay Text will write the currently picked primitive index and id in the lower left corner. The Overlay Timeline will draw a horizontal line with numbered keys. The Overlay Curves will trace out the keyed values over time.

Press Enter to toggle isolation mode where, if a primitive is picked, all other primitives are dramatically scaled down.

Press Delete to remove the current key on a selected primitive. Press Shift-Delete to delete its entire channel of keys.