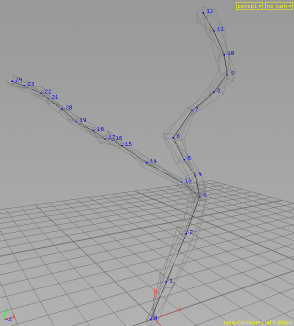 Reduces a physical body to a skeleton.

The Input Surface can be any collection of points connected by primitives.

The Output Surface is the resulting collection of lines representing the body.

If an input Point Group is given, only points in that group will be affected.

The Root gives a general location where the first generated line should start, perhaps the base of a tree or the hip center of a character.

Selecting Degenerate activates the method of progressive degeneration. Polygons are incrementally collapsed by selectively unifying a pair of points connected by an edge into a single point. With this turned off, the prior method involves averaging points on adjacent faces, like a simple smoothing algorithm.

The Expand option will collocate nearby points closer than the Fusion distance. Currently, the redundant points are not removed, such as a Fuse operator might do.

If Output Degenerate Surface is on, the collapsed surface will be written to the output. This may not be particularly useful except for debugging.