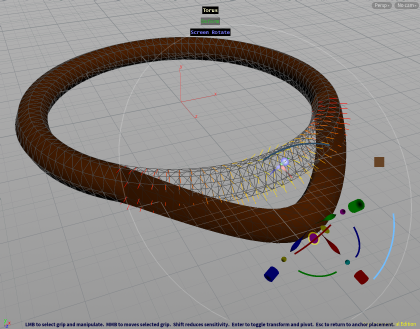 The input surface is deformed through a basic transform, allowing for a weighted effect per point.

HammerOp nodes can coordinate their user interfaces, allowing the user the monitor multiple such nodes as once and quickly switch from one to another.

The Input Surface is subject to a standard transformation, potentially involving translation, rotation, and scaling. An optional Driver Surface can be used to anchor the changes. Otherwise the undeformed Input Surface is used

The Name provides a label for the visual interface. This can be helpful when using the feature to quickly switch between multiple HammerOp nodes.

If specified, only points in the Point Group are eligible for modification. Likewise, if a Primitive Group is specified, any eligible points must also be a vertex of a primitive in that group.

The Face and Barycenter on the driver surface is usually set when a location is selected through the user interface, but these values can also be set manually.

If a point real Weight Attribute is specified and found, the weight value for each point gives a unit value of how much that point should be affect by the transformation. Other parameters can play a part in determining the final weight used.

If the transform is Sphere Weighted, a ramp of weights is applied as a falloff over a Radius from the manipulator center. The ramp can be made non-linear with a Power other than one.

For more precision, a Sphere Falloff Ramp widget can be used. The weight attribute, the power setting, and the ramp widget are all cumulative.

The Envelope controls the effect over all the points. It can be useful for quickly checking just how much a particular node is changing the surface or for keying the effect in and out over time.

The Orientation specifies how the transformation axes are placed prior to adding any rotational deformation. They can either match the World Axes or lock to either the input or driver surface. For a surface, the Y axis will lock to surface normal and the X and Z will lock to an consistent evaluation of the UV coordinates, if available.

The Pivot Translate, Pivot Rotate, Deform Translate, Deform Rotate, and Deform Scale are generally updated through the user interface, but these values can be set manually as well.

The Grip Labels will show the name of known HammerOp nodes in their place in the 3D viewer.

The Dimming, Foreshadow, and Aura changes the intensity of various visual feedback effects.

When in tool mode, hitting Escape will switch between picking and offset manipulation.

In manipulator mode, hitting return will switch between manipulating the rotate with the translate or just the pivot alone.