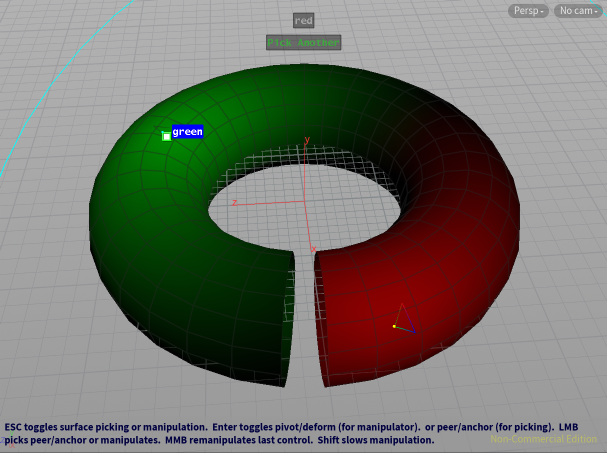 color influences do not cross gap in geometry

Transfers an attribute value from influence locations based on geodesic distance.

An attribute will be created on the Input Surface.

Using influence primitives instead of points was chosen for compatibility with WayPointOp, which provides an nice generalized system to specify multiple influences. But, any means that provides a compatible input should work fine.

The primitive real or vector Value Attribute provides the source value for each primitive of the Influence Surface.

The point vector Create Attribute on the Input Surface is where the computed result for each input point will be stored. If you choose to Also Set Color, the same value will overwrite the color attribute.

The primitive real Radius Attribute on the Influence Surface indicate the reach of that influence, with a linear fade to that distance. Each radius is multiplied by Scale Radius. If there is no Radius Attribute, then Scale Radius is the uniform radius for all influences.