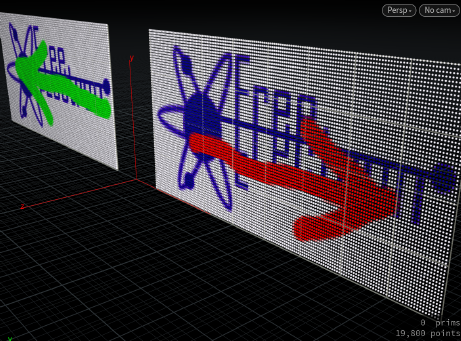 The single Input Surface is saved as a point map.

An optional Driver Surface can be used to position loaded data.

The Raster Attr Prefix is prepended on on several attribute names to store descriptions of size and format.

A point Value Attribute is expected to contain magnitude values positioned on a even grid of UV location. The UV location are presumably associated with some other surface, like a character skin, but that context is not relevant to this node.

If Save in toggled on, the data is saved to the named File. Every instance of the Replace Pattern found in that filename is replaced with the unique partition name that the point belongs to. This allows for points in multiple UV spaces to occupy the same point map object.

If Make Directory is active and the path to the save file does not already exist, it will be created.

If Load in toggled on, new data is loaded from the named File.

The primitive string Partition Attribute breaks up the optional driver surface into unique regions corresponding to individual maps. These strings are used to replace any instance of the replacement pattern in the load file name.

Currently, the attribute is expected to be a float.

Future versions should be able to load images as point maps.